A Condensed guide to a sabattical in Southwest England and London:

It is a known fact that we Malaysians would do anything to get a free ride. We honestly didn’t mind paying to see the famed Roman Baths Hot Springs, but we entered the back-side of the bath house, manned by a single elderly chap. When we asked him where to pay the 15 quids per person (expensive!!), he told us to just walk through the bath house to the front and get the tour ticket there. Needless to say, by the time we walked through the bath house, we had taken sufficient photos and experienced the huge Roman dining hall to pass the actual tour.

14. Do the Free Touristy Stuff

If you’re into churches (as in architecture, not church girls), Bath has a pretty good one called the Bath Abbey, or St Peter. I think. We didn’t get to go inside because they were closed for service. And in any case we were in a hurry.

Another place you could go is the royal crescent, which is just a bunch of houses that are shaped as moon crescent. It’s supposed to be an architectural wonder, but I wouldn’t know, as my whole architectural experience consist of trying to extend my house kitchen into the backyard by 8 feet.

Something closer to my specialty would be the Jane Austen Centre. Now, I’ve read most of her books and I can honestly tell you I would likely nod off to sleep for each book. I don’t really get her books, and I’ve read Emma, Persuasions, Sense and Sensibility, Pride and Prejudice, Mansfield Park. The only one I couldn’t get past was Northanger Abbey. Jane had a thing for Bath, so apparently she stayed around this area, which is near to the Crescent place. In the centre I found the solution for introducing Jane to my future kids: Comics! Marvel apparently had translated her books into comic form, which is great! Now at least we won’t fall asleep over the genteel English culture!

Finally, there’s probably a couple of tourist trap around Bath, aside from the obvious Roman Baths and Spa (get from Thailand, much better and cheaper). One that we got sucked in was this place called Sally Lunn, which is ‘World Famous’ for her Sally Lunn Bun. It’s at the oldest house in Bath, apparently built 1482. Heard of Sally Lunn? No? Me neither, so either we are not from this world or the ‘World Famous’ is as mythical as my ‘World Famous’ golf blog. Anyway, for the chinese, it’s difficult to say Sally Lunn without snickering at the surname a little. Hehe. Immature urchins.

Anyway, just take pictures but don’t try to bun, because it sucks. It’s just bread with chocolate (the one we had) and I had a hard time stuffing it in, knowing I paid an equivalent of RM30 for it.Apparently Legend had it that Sally hid the recipe at a secret compartment in the house, which was discovered by some intrepid busybody. Obviously, she hid it to remove the horrendous recipe from the face of this earth. Why must people uncover things that should be laid to rest? Haven’t they learnt from Transformers, not to dig up that old hack Sentinel Prime?? 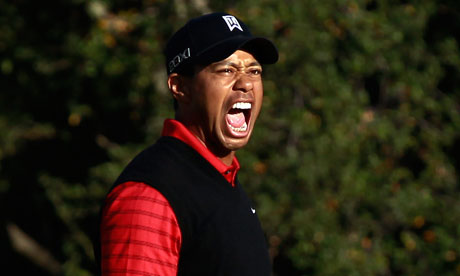 So, now he has finally won. We’ve been predicting this for ages. A guy with that many wins, that many majors ain’t gonna disappear into the sunset. He’s back, he’s now single without any worries of infidelity, and he has won….a mickey mouse event, nonetheless but still, WON!

You can feel the huge amount of relief as he dropped that last putt to beat Zach Johnson by a stroke for the Chevron event. Immediately the Tiger Woods fan club is now back to life. We’re big fans of Tiger not because we’re glory seekers, but he’s the only reason that separates golf from lawn bowl in terms of watchability on TV. Seriously. Garcia, Rory and all these guys are good, but they are so boring to watch. Yes, even Garcia. With Woods, you have history. You’ve grown up with this dude. You’ve played golf because of him. You have secretly became an internal commentator of your game comparing your stroke to that of Tiger’s. And you’ve seen him fall from the golfing heavens to hell, and now, apparently back again. This guy IS golf for many of our generations. So, what’s there not to support? He’s the only person wielding a 5-iron that is worth supporting in this dreary sport. Golf is a great player’s game, but it’s a lousy spectator sport, face it.

Now, the one thing that has been tough to swallow over these past months, aside from the ridiculous merry go round we see at world number 1, are people who thinks that they are obliged to comment about Tiger’s sorry game state.

Even when he wins, you get a joke like Jeff Maggert, commenting:

“I’m sure he’ll count it as a win. But 18 guys? C’mon! At this time of year, you’re fat on turkey looking forward to Christmas. But you don’t have the guys from behind pressing you for four days when there are only 18 guys in the field. You’re only having to beat three or four guys at the end of the day, where normally you might have seven or eight guys nipping at your heels.”

Jeff Maggert then says sagely, “For him to win this week is obviously a stepping stone for his confidence. He played well on a tough golf course.”

Jeff Maggert. Winner of a grand total of 12 professional tournaments. Commenting on someone who has 149 wins in all tournaments. That is an amazing 8% of Tiger’s achievements. And that too winning titles like the awesome Malaysian Open back in 1989. Who the heck is this guy, Jeff Maggot? What has he done, except to eat Tiger’s dirt?

And why do people, especially the bottom feeders, suddenly want to comment about Tiger when Gilagolf has been saying all the while that Tiger will return?