I have had my Taylormade RAC-LT for more than 8 years now. I like it. It’s a great iron to hit, and I’ve hit some ridiculously good shots with it. It’s not too difficult and only occasionally gives me the duck hook on the long ones simply because of my horrendous swing. I had no intentions to change it, until a good friend of mine asked if I wanted to switch with him.

He bought a Mizuno MP-52 set and couldn’t hit it. He’s a half beginner of sorts, and the MP-52, is really not easy to hit. Really. I tried it and I shanked the devil out of it.

So I said yes.

I traded away the RAC which had been so ingrained in my muscles that it was like an extension of my arm, for a really really, ridiculously sexy set of irons.

The MP head is way, way heavier than the RAC, so I had a bad time adjusting to it. Many, many iron shots were stubbed into the ground like 5 feet away from the ball (exaggeration obviously), resulting in wet earth pounding further away than my ball. On most of my par 3s, I duffed, either ending up in the water or before the ladies tee box. On some par 3s where I remembered to extend a bit more effort in not letting the head drop, and I pured it —heaven. The 5 iron I hit to 10 feet on one hole was a thing of wonderment — straight, no slice, no hook, just pure straight, with a bit of feedback residual on the NS PRO shaft.

And then distance. Now, on paper, one of the reasons why I agreed to the MP was its similarity in loft with my LT. Both are tweaked slightly lower loft – for instance, PW to 47 degrees, as opposed to 48, which most of the Cleveland wedges I have is tweaked to. Then again, some irons like Ping tweaks the PW to 46.

The problem here could be the lie angle. I won’t lie. I have no bloody idea what difference it makes. And of course the offset. For the six iron,  it’s about 0.2mm less, and the lie angle is 1 degree less…I suppose it just means it’s flatter, which…I have no idea what it does to me. Slice more? Anyway, I was very comfortable hitting my LT, and with the MPs, it’s just all over the place. That being said, I think I’m one of those guys that are not so good, who will adjust to the club as opposed to having a swing consistent enough for the club to adjust to.

As you can tell, this is not much of a club review. The fact is, I don’t really know. But I’ll just put some fancy specs here to make this site have more dignity in the golf community. 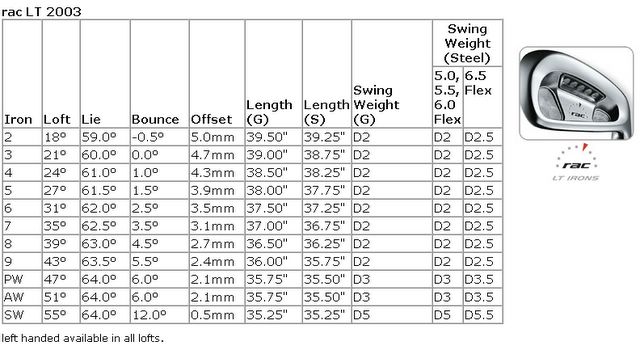 Also, there is a saying that the MP52 is only for low-mid handicappers.

I kinda disagree to that. How do you actually know WHY I am a high handicapper? I could be a God at my irons, and a twit in my short game. Wouldn’t then I might be better off being even BETTER at my irons by upgrading to a player iron, even if I am a 24 handicapper? I suppose, it’s something we should know. I think I hit it decent with my RAC. It’s just that I can’t chip because of the yips. So does it make sense for me to upgrade to the MP?

I think maybe 3 – 4 rounds of it should give it a fair shake whether I can handle it. If I can’t, I can’t. I’ll go back to the RAC. But I think maybe the philosophy should be:

“Get an iron set that requires you to improve – and you will improve” – Gilagolf Mantra.