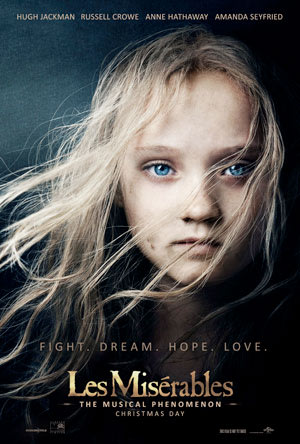 Aside from golf, there’s another great passion in my life: reading. I know it sounds unbelievable, but my entire love for writing did not stem from English classes and lessons in my high school, which were so poor in SO MANY WAYS. It came from devouring books while growing up. And not just any books, but books that these days you’d use for paper weights: Dostoevsky, Tolstoy, Dickens, Thomas Hardy et al. I was a teenager and my best companion while reading these suckers was a little Oxford dictionary. They don’t have that phrase “What the dickens are you talking about” for nothing.

One of the books I happened to come across before I knew there was a musical or now, a movie, was a book called Les Miserables by Victor Hugo. I enjoyed his Notre Dame de Paris, so I started reading all his books. Les Miserables was a 2000 page tome. It was massive. And it rocked. It was the best book I’ve ever read…and that’s not even in the original language. It was written in French. I read three different translations and contemplated taking up French in university to read the original manuscript.

I have read the book about six times, not counting the random chapter readings I’ll read for fun when I am bored. I’ve watched the musical live 5 times: 3 times in Australia and twice in West End…over two days in London. One with my wife, and the very next day when she was shopping, I watched it Again!

So, when the movie came out, it doesn’t take a genius to figure out that even if I’ve been away from the cinema for 7 months already, I’ll worm my way in there just to watch this. Very briefly (since most of my gilagolfers readers have already tuned out, maybe):

Jean Valjean – great acting and ok singing, except for the massacre of “Bring Him Home”. The song (which shouldn’t be sung at all in the first place because that wasn’t how Valjean felt in the book), is sung with full falsetto, not a screaming voice, Mr Wolverine!

Fantine – Super “I dreamed a Dream”. Must watch just for this.

New Song – “Suddenly” is absolutely fantastic and faithful to the book. This is so necessary because this just brought a different understanding to Valjean that the musical failed to do.

Faithful to Book – Lots of scenes depicted are from the book. Like the giant elephant statue where Gavroche emerges from and Valjean’s escape. Excellent tributes to the book so nerds like me can appreciate it.

Gavroche – Excellent depiction, but still no word about him being Ponine’s brother.

Cosette – Great singing, but character still too shallow…it’s not her fault, because even in the book, she wasn’t a great character. Although she’s the “Face” of Les Mis.

Borat as Thenardier – This was great casting. Excellent villain.

What Did not Work

Eponine – Samantha Barks is way, way too hot to be a poor “wretched child” as described in the books. And looks too well-fed. But Way. Too. Hot. Marius must be either blind to prefer Cosette to this Eponine (especially when she’s drenched in rain), or he’s secretly gay.

Javert – Should stick to acting, not singing, Mr Crowe. He was terrible in singing.

Marius – Still so unlikeable, from the book, musical and movie. You wish he’d just die quicker.

Pacing – If you’re not familiar with the story, it’s a bit tough to follow. I saw like some people leaving and some asking, “WTF is this la?” halfway through.

OK, that’s it for my completely non-related to golf post for the year.