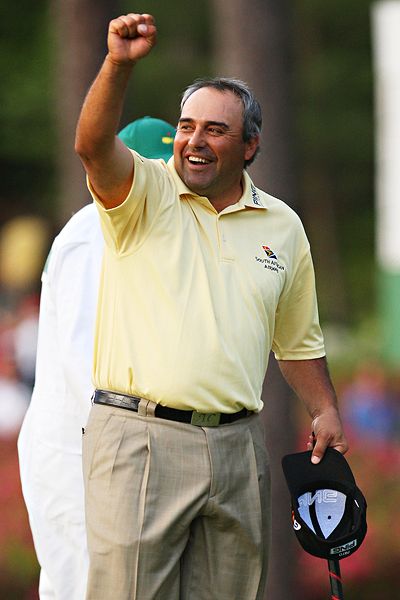 What does a full grown Siberian Tiger, a male californian Sea Lion, an adult polar bear and the top 3 leaders in Augusta Masters have in common?

The Augusta transcends the sport. You’re playing into folklore, into legend, into tradition. Once you wear the green jacket, you are immediately immortal. You can go out into the main street and stop a 16 wheeler with that jacket. You will not die. You are an Augusta winner. You are a MASTER.

I once heard from a wise man, that any activity you can do while simultaneously having a cigaratte and a beer is NOT a sport. I’ll add, any activity you can do with 0 amount of physical requirements, a belly so large you can’t see your toes and an utter disregard to gym activities….that’s not a sport. It’s a hobby that brings these guys millions of dollars because of idiots willing to invest millions to learn the game, to buy the equipments and generally having a horrible time hacking up nature in the process. Ah, the cycle of life.

So, the Gilagolf Prediction Engine (GPE)is running full force once again, for the Augusta 2009 champion!

We’re gonna go out and say it. Nobody, no pundits, no experts, no site is going to say it because it’s politcally incorrect, but Gilagolf is not bound by editorial parameters, we will just say what is on everyone’s mind: No way the golfing gods are gonna allow a guy weighing in at 210 pounds fit into the green jacket. I know they custom make it, but come on face it, look back at history. The last time a fat old  guy won it was in 1998, Mark O Meara. I know, Phil won it a couple of times the last few years, but that was before he started representing a beached walrus on the greens. And who’s gonna let a fellow from Argentina named El Pato (The Duck) carry away one of America’s greatest tradition? He’ll bust, because he’s too fat (I’m fat too, so I really understand the golfing gods’ discrimination, because I also suck when the pressure mounts for me to win my 3 ringgit on the 18th).

For some unknown reason, there’s just something about KP we dislike. It might be the fact that he looks like the coffee shop Char Kueh Teow seller and has a swing resembling a squirrel trying to crack a walnut, and still earns a million bucks every year. That must be it. We hate him because on the outside he’s just like us, fat like us, balding like us, unfashionable like us, but for some strange reason only Almighty in Heaven knows, crushes the ball a thousand miles and putts like the hole is the size of Jupiter. And probably has a hot wife and a Diablo in the garage. Bust, KP, bust!!

Ah, Chad. He’s like a cuddly Winnie The Pooh, only with pants on. We like his workhorse type of style,without much emotions, playing as if he’s in a coma. Unfortunately, he’s a bust. He can’t perform under pressure of any sort, as seen with his double on 16, and a bogey on the last. He still looks like Marshmallow Man though, and that’s a saving grace for him.

If Chad is cuddly, Jim looks like he’s the witch of Endor. Looks department, the rear end of a army truck is probably more attractive than him, but he has proven himself by winning the US Open. OK, Angel won it too, but please, no fat winners, as predicted. So Jimmy is due to win, because he hits it straight. With Augusta playing benign, straight hitters will have a chance, and he putts better than anyone not named Tiger. He has the occasional hook when pressured (with a swing like that, a hook would seem like a great result), but we’re banking on Jimmy. Go, and show us, the FIST OF FURY(K)!!!

Steve is a nice guy, but his personality is as interesting as a piece of bamboo. It’s up to your interpretation on what that means, but he scored so low in charisma department, the GPE blanked out on him and instead focused on the growth of azaleas in milimeters during summer days. In other words, bust.

These three folks are interesting. Rory is a guy nobody likes except us, because if you don’t think Tiger is beatable, then stay at home and play ping pong with your poodle instead. You need to go out to beat the crap out of Tiger, and Rory said that. Why blame him, even though he’s so completely insane to think he would be the guy to beat Tiger? Shingo, you gotta give it to the Japs, they know how to get attention. Shingo knows gwai los cant tell one asian dude from the next, so he wears a cowboy cap that makes him look like a complete twit on the course, but at least stops the commentators from confusing him  with the itenarant chinese gardener in Augusta.

Who the heck is the third guy? Todd Hamilton? The guy that won the British Open a couple of years back. Please. He’s in the standards of Shaun Micheel, Rich Beem and other clowns who won by fluke. Bust, bust, bust.

Watch out for the guy in Red on Sunday. Although we doubt he’ll win, we’re still watching golf because of him, even if he’s 50 strokes behind. It’s more interesting watching Tiger mow his lawn than watching, say, Stricker play in the final round of Augusta. The guy in the middle have won it a couple of times, so don’t count Phil out. We’d love to watch him do that embarassing jump he did when he won the first Masters title in 2004. Seriously, he wouldn’t have been able to clear over a piece of A4 paper with that jump. The third guy is Mr Anthony Kim who whacked in 11 birdies on Friday. 11!! Plus he looks like the pai kia in the Fast and Furious Tokyo Drift, so better watch this guy closely. Anyone that looks like a chinese pai kia deserves to our support automatically.