So 2015 has ended, and now 2016 is in but golf is going to be scarce. I suppose this is a good time as any to look back what has been achieved last year.

First of, summary stats above.

The most damning stats here is the 91.21 average gross. This is just not good enough. I wanted to set out last year to break 90, but in 39 rounds played, I only broke 90 15 times, which is a poor 38% while only breaking 85 in 2 tries (both times at Mines, incidentally). I suppose the only good news is that I only broke 100 twice – once in Seri Selangor and the other one recently in the blow out in Nilai Springs. Otherwise, it’s mostly 90 – 95 scoreline. In fact, it took me 6 games into 2015 before carding an 86, and in first 10 games, only broke 90 twice. The good news, is that, in the last 10 games, I broke 90 on 6 occasions. Granted, these were played at a lot better courses compared to the first 6 games and I didn’t have to tackle Seri Selangor in the last 10 games. My fairway hits are also low, but it doesn’t really matter because in some games, I can hit all the fairways but still fail miserably in scoring, while the opposite is true, whereby I miss all fairways and still score pretty well. My GIR is up, which is good, and at 2.56% par breakers, it means I had my share of birdies also. 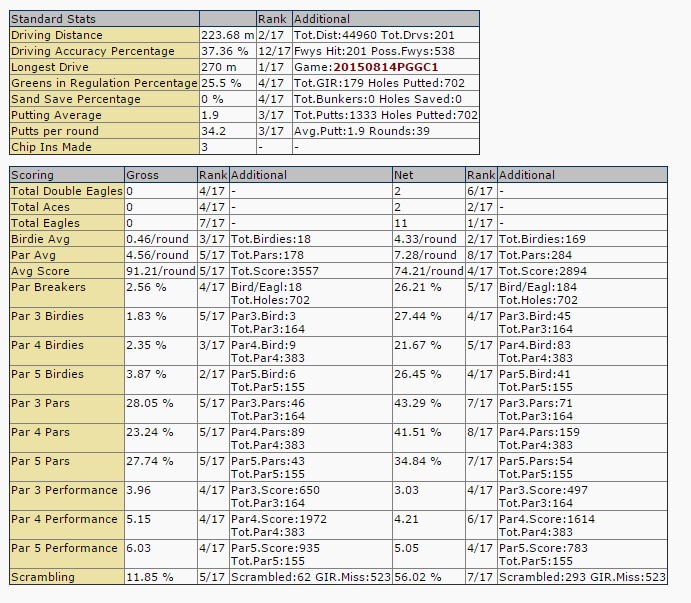 A further break down as above.

I recorded 18 birdies last year, of course, the best coming from the recent Mines game where I hit back to back birds. Overall, I have around 4.5 pars per game, which technically is just not good enough. I should be comfortably averaging around 6 – 7 pars per game. The encouraging fact is that my iron games has improved a lot. My par 3 is being played a lot better, and has highest conversions of pars and play to only +0.96. Which is great. That means, if I can work out my par 4s, I should be playing a steady 15 – 16 handicap, as opposed to a very unsteady 16.

Finally – horses for courses. It’s pretty obvious my favourite courses also happens to be the best courses – Glenmarie Valley and Gardens, and Mines. Of course, Bangi has to be there since it;s such a short course. Kota permai, Sungai Long are played around 90, while Palm Garden, around 91.

So there you have it. 2015 has been filled with some pretty amazing shots (2 birdies in a row for example) and some pretty crap ones (10 greens in regulations and 6 three putts), and as I approach 2016, new father of 2, I don’t expect too much gametime. Whatever game I have, hopefully I can learn how to take those opportunities and break that darn 90!

I don’t think I achieve my goal of breaking 90 on average last year. I am probably hovering around the 91 – 92 mark. Which kinda suck. I had around 4 games I didn’t take into account last year – the scorecards are still in my bag. I think it reads around 88, 89, 102 and 88 or something. The 102 is the score in Nilai Springs, where I just had the shittiest time ever. Everyone knows Nilai Spring can be a bi*ch if you carry a hook. I think 99% of the holes in there are set up to kill the hooker. OB left. OB left. Water left. OB left. There was one hole, I hooked 4 drives into the bush. I was so pissed. Of course that hole I counted off as quadruple. In reality its probably around Unquadraguple. Look it up. It means +41.

Anyway, starting 2016, my golf will generally be severely limited. My first kid is experiencing first hand his first year at kindy and every morning screams like how I scream when I miss a two foot putt. After screaming, he goes into a negotiative mode, like: “Can we just see the fishes and go?” “I want to see grandma” “I want to be with papa” and my all time favourite “I want to be a baby”. When everything fails, he goes into his default mode of screaming his lungs out. Every. Single. Day.

So, by the time I drop this bundle of screams off to be the teacher’s problem, it’s already around 8.45. I don’t think I will be picking up my golf clubs anytime soon, unless for an afternoon game maybe during the CNY.

My resolutions? Not to make any resolutions for golf. I think overall I have really improved. When playing in good golf courses. 2015 was a year where we played in Mines, Glenmarie, Sungai Long, Palm Garden, Kota Permai. When I go back to shitty courses like Nilai Springs and Kinrara and Seri Selangor, I generally end up playing like a panda humping a walrus. Technically I don’t think it’s possible but you get my point.

So don’t expect too much golf course reviews going into 2016. I might review a bit about baby food and stuff, but that’s over at my other blog at giladad.com.

For now, happy hacking and happy new year, you gilagolfers!

Haven’t been posting in a while but with a good reason. Finally having some reprieve after the Christmas season when we welcomed our second son into the world. Just to everyone who says the second kid is easier – NO. It’s not. It’s the same thing, except now you have the additional 3.5 year old kid running up and down and causing havoc in the house and screaming he doesn’t want to go to kindergarten at 7 am in the morning. So, no. Whoever said that only has the theory, but not the practice. They. Have. No. Clue.

Anyway, more on that later. For now, he is feeding reasonably well. The jaundice is the big worry, so much so, we were advised to rent a phototherapy unit in the house. It sounds much worse than it is. It’s actually pretty convenience, it’s around RM500 for 4 days 3 nights, and you basically lay the kid face down for 2 – 3 hours per session (around 3 sessions or 4 per day depending on how long you feed/breastfeed). So yeah it’s like maybe a round of golf in Mines or something, plus caddy tips and lunch. He sleeps very well like this as opposed to face up, but you need to have someone watch over him though and make sure he doesn’t block his nose or something. So the moment he moves, you should be up there and not watching football or something. We had him on a level of 270 for jaundice (bilirubin, if we need to be more exact) – but after 3 days we have gotten him down to 210, which is a safer level for 10 day old baby. We are putting him through 2 more sessions before our rent finishes. There’s this company in Kelana Jaya that does it http://www.bluelite.com.my/v2/. Its quite simple actually, in fact, the toughest part of it all would be to put the eye cover over his head and trying to turn him properly without thinking you would rupture his neck in the process. PM me if anyone needs more information in this. Not that I am an expert, but if you are anything like me thinking that home phototherapy is like understanding the science behind Interstellar movie, you will be better equipped once you realise the only instruction is: Turn On, Turn Off.

Welcome to earth, my little guy.