I honestly cannot believe what is happening.

After Adam Scott birdied the 14th, I gave up watching and decided to watch UFC at Fox Premium Movie.

And now has a 5 footer to tie.

Are Australians destined to be the greatest chokers of all time? Remember ’96 Augusta, the collapse of Greg Norman after a six shot final day lead? Or Thomas Bjorn, who led by 3 with 4 to play in the 2003 British Open, and took 3 to get out of the bunker on the 16th? CHOKE. How about Jean Van De Velde? 3 stroke lead and choked at the Carnoustie.

And guess what? Adam Scott just lost the British Open.

It seems that we jinxed him when we gave him the Gilagolf winner about an hour ago. It seems that justice has been done, that a racist will not win anything this year. I’m talking about the Racist Steve Williams, not the sotong Adam Scott.

After that, 4 bogeys in the row, and one of our Gilagolf favourites, Mr Ernie Els, WINS IT!

How powerful is the Gilagolf Jinx?

Here’s the official one.

He has about six holes left, but I’ll just put it down as he has won it. In fact, they should just give it to him right now and save us the trouble. The entire bunch of PGA professionals who earn millions a year have suddenly started to hack around like some pathetic Gilagolfers.

Tiger? He did an absolutely stupid shot on the sixth where he hit into the wall of bunker en route to a triple bogey. That would have been ok, if not he just slammed in 3 bogeys as well, and all of them absolutely stupid putting. Can someone tell him to just get rid of the god awful Nike putter he is using?? He TRULY SUCK at Nike Putter! Go back to your scotty cameron!!! Anyway, he’s gone, as he bogeys 14th to fall back to -3. Six back, too much to play, another pathetic final round showing of a guy who used to own the final rounds of major. Blasted Nike equipment messing up Tiger Woods.

Snedeker? He’s been out of it since Saturday. I don’t even know why he’s playing golf.

Graeme McDowell? The way he swings reminds me of a friend of mine, who plays to a 24 handicap. They have similar swings. And Graeme is an absolutely horrendous player. His only major was due to that equally stupid Dustin Johnson messing up.

Great. As I write this, Adam Scott just birdied 14th. He has to be AN ABSOLUTE USELESS PIECE OF CRAP if he loses this Open. It’s not that I don’t like Adam Scott. I just don’t like his racist caddy, Steve Williams, who should have been shot and hung. Adam Scott doesn’t look like anyone who likes to pick a fight, so I guess he just swept it under the carpet. I can’t believe that idiot Steve Williams can get away with calling someone Black Asshole when John Terry or Luis Suarez has to get punished for the same sort of remark.

Everyone just absolutely sucked. Such a lousy final round of the Open. I’m done ranting.

Well it’s down to 18 more holes and surprise, Tiger is up to fourth position. I thought for sure when he messed up the two par 5s on Friday, especially the second one, that he would spiral down into crap land that he has always done before. But birdie 16th and hole out birdie from sand on 18th? Classic Tiger.

Today? You have no idea, but about 13 billion people plus from the alien planet that Tiger comes from were hoping against hope that the final putt on the 18th green, a relatively easy 15 footer, left to right uphill would go in. If it did, he would be -7 and in all probability, book a final slot with Adam Scott. It’s not so much with Adam Scott, who has a personality of a wombat, but a matchup against his fiery caddy, a Steve Williams who famously called his ex-employer who gave him more than 10 million USD during their time together, a black asshole.

As it is, Mr Woods purposely missed it, and we lost a cracking shot at possibly the greatest final round ever in a major.

Moe, Larry and Curly, or more accurately, the world number 1 -3.

Moe, Larry and Curly represents the 3 clowns that are currently above Tiger Woods in the world ranking. Here’s they are: 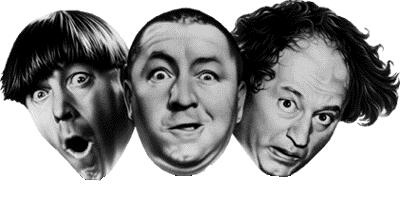 These 3 jokers are a constant embarassment to the game. They truly suck, yet annoyingly, they are playing placeholders for world number 1 ranking. We’ve never seen such weak world number 1 -3 in the entire history of the sport, eversince they disallowed chimps to compete in the open back in 1741.

Luke Donald is officially the worst world number 1 ever. Ever. Yet again he proves he will NEVER win a major, and they should actually just tranquilise him now in every major he will play from here on. Despite yakking about his ability and his promise, the fact remains is this: He suck as a world number 1. He has no personality and he looks like Luke Skywalker…and like Luke Skywalker, who plays second fiddle to Han Solo, Luke Donald will never be able to match up to golf’s black Han Solo, who is now world number 4. He is Tied 14. 10 STROKES back.

Rory? After today’s astounding 73, he says he lost faith in his swing. He’s probably swinging better with his tennis girlfriend. Everyone’s saying his 19th holes are costing him his game, and they might be right. Too many nights with that girl, Carol Wozniakiskoncheskykanchelkiskovicaabdulmaniamchong. Whatever her name is. Rory is gone. He’s gone the way of Sergio. He’s tied 54. 15 strokes away. He will play well tomorrow. He always plays well when there’s no pressure.

Lee Westwood? Less said about fatty the better. He is also tied 54, 15 strokes away.

Golf needs what tennis has. A top 3 that can win majors. A top 3 that’s always up there, whacking and smacking each other in the head. A top 3 that can contend. That’s why we love Tennis now, because Fed, Rafa and Djokovic can really belt in, and their personalities are so interesting, and so conflicting against each other.

Damn, I miss Vijay and his smack talk. VEEJ, get back to form, man!!

Once upon a time, two fellow sports giant ruled their sport. One with clubs and the other with racquets. They conquered their foes one by one enroute to winning majors after majors, each setting their own records in their respective sport, each dazzling their opponents and became known as the Destroyers of Hope. They literally destroyed hope in their fellow competitors.

Then, a strange thing happened.

One of the giants fell, pounded in the face by his wife, revealed to be not a god, but a true devil, sleeping with 2000 women and found in bed with another woman as his real wife was giving birth. The other giant sort of fell, due to injury and the birth of his twin daughters to a not so hot wife. In any case, both were replaced as the alpha male in their sport. The first replaced by a trio of European misfits, one sporting pubic hair on his head; the other giant replaced by a Spanish neanderthal and a Serbian communist.

This year, the year of the Dragon, these giants will rise. The first one, usually decked in red is still coming to terms with his newfound powers, and beset with inconsistency still by winning one week and missing the cut in the other, but surely rising to the top to reclaim his spot from the bunch of hopeless pretenders. The other giant, has now summit to number 1 again, and for all his sissy crying after winning Wimbledon, remains the GOAT of Tennis…the GREATEST OF ALL TIME.

Here are the side by side stats. Who is the GREATER? 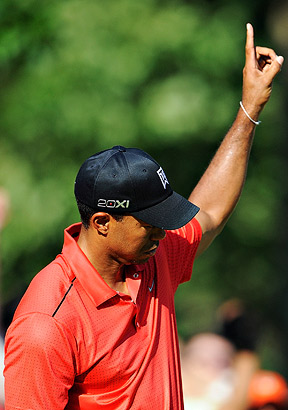 When the world caved in and gave up on the only good, black golfer out there, Gilagolf stuck to him. When sunny weather fans like the god awful Accenture threw him on the wayside, and Tag Heuer crapped him, and Gillette and Gatorade shunned him like a leper and ironically AT&T threw him under the bus…Gilagolf stuck by him. Too bad the Gilagolf brand is worth slightly more than a discarded banana peel, but hey, at least we’re loyal, right.

Every post written has been how Tiger is going to come back and make these fair weather friends regret the day they rejected him. How he’s going to take back the number one spot from musical chairs clowns like Lee “Fatty” Westwood, Luke “Help me I can’t win a major” Donald, Rory “Help me I can’t make a cut” McIlroy and Martin “Help me I can’t hit a blardy Draw” Kaymer. I mean, it’s ridiculous. How can anyone in their right mind every write off a guy who has won more than anyone in this world?

Or even better here’s the statistics for the idiots who dropped Tiger:

Winning AT&T is just another step to getting back number 1 and stopping all these sorry excuse of golfers from playing pretend. Next up, winning back a major and getting back as the alpha dog.