So one of the conclusion of my previous range session where I was twacking the bejeezus out of the ball with the new Stack and Tilt swing, was that I began to feel my left knee a little sore the next day. OK – a lot more sore. I didn’t think SnT would cause knee problems, but the problem was the stand up motion and the straightening (or jerking up) of the left knee would be naturally stressful for someone who has never had that part of the body worked out before. While I liked the results of the swing on the golf ball, I didn’t really enjoy the results of the swing on my knee, which isn’t strong to begin with.

So again, back to reading and researching, and one of the ways I learn on how to alleviate knee problems was to flare out the left knee and feet. This is also advocated by Hogan, but I always thought this opens up the body somewhat for an outside-in swing path. But because I’m using a few concepts from Venetos where I pre-set my body in a closed position, the flaring of my feet generally doesn’t change my swing patch much. But what it theoretically should be doing is to relieve the stress of the knee, since my knee isn’t rotating as much. It’s like I am also pre-setting my knee post-swing.

Additionally, I found that the right knee straightening up too much lends too much weight on my already weak left side, which made it all the more uncomfortable, so for this round, I had to experiment with these concepts of flaring out the feet and ensuring I maintain a bit of flex on my right knee and not do the Hogan stance at the top of my swing.

The results was mixed, I am still getting used to my shoulder turn, but I did find that flaring out my feet did alleviate my pain a fair bit. I didn’t feel so stressed on the knee after a session of 200 balls (as opposed to 100 balls previous). I also tried working on the flex on the right knee and not have such an extreme amount of weight on my left, but maintain a bit more like 60-40 favoring my left. Again, these are tweaks.

But the driver swing is coming along. Although my stance now, with my flare feet makes me look like a clown, I don’t care because I was now blasting the ball the way I’ve never done before.

The other issue I find now is that because my right elbow is ‘connected’ to my body, I don’t get the super arch I try to get on my driver. When I do try to do it, my left arm ends up bending like below and this usually results in the club dropping without speed on impact. 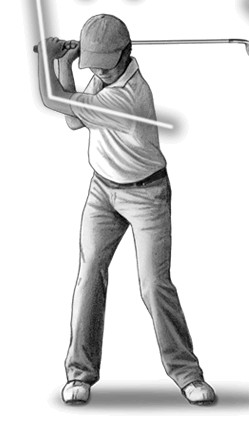 So to keep the left hand straight is a key thought and if it starts ‘breaking’ then you know you are overswinging. It doesn’t really matter, because even with a bit of a half or three quarter swing, I still can whack the ball further than I ever did with a ‘big arch’ swing.

I think the swing, after around 600 balls and four session on the range is shaping up ok. There is a drill I even do where I consciously just do a half swing with my right elbow tucked close to the body on my long irons. My five iron is still slightly problematic, as my 3 wood, but these are problems I already had in my previous swing, so it’s no big loss that I still can’t hit them properly. I would say, my driver right now is further than my previous, it’s more hot off the face, but the dispersion is a little worse – sometimes, the ball can go straight, sometimes left and sometimes right – a bit more than my previous swing.

But again, these are attributable to an overhaul of swing after 16 years. It’s not going to happen overnight. It will get worse before it gets better. I think with this mantra, I can try to get a balance of this SnT swing that fits the limitation of my body and see if I can play golf better, and more importantly – longer.