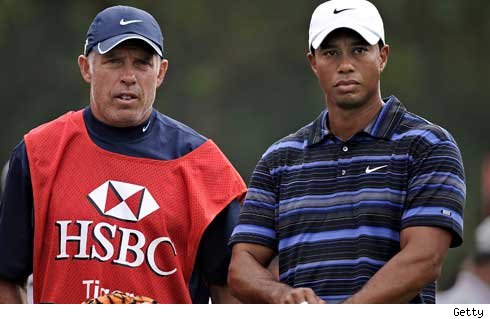 I just thought, on the eve of the final major of 2011, on the eve of the final event where Tiger needs to get it done or go home for the season: that there are so many more compelling storylines than the one that’s hogging the show right now. Not to say the least about the lousy economy or the bashing the stock market has taken over the weeks; we’ll focus solely on golf.

Golf. That’s right. When has it become the circus that it is?

They call it Caddie-Gate. They call out Tiger for being a lousy employer. They bring to attention Tiger who has not changed, who is still the arrogant prick before and after the hydrant incident in November 2009. So he fired his Caddie. The caddie who has been ‘loyal’ to him all these years, his best friend, his old buddy, his wing man. What kind of sick, mentally challenged idiot would do that? What’s wrong with you, Tiger?

Steve Williams showed the world who the real villain was in his post round interview after winning in Firestone with Adam Scott (that is such an ironic story line), saying that the win was the best week he had in life. Are you serious?

What about winning all the majors with Tiger?

What about getting married (well, he divorced but he wouldn’t have known that when he got married, right?)

Or just for sakes, how about saying the charitable foundation he started out for underprivileged kids as the best week of your life?

Steve Williams earned in excess of $10 Million during his time with Tiger. For carrying a bag. And throwing cameras and photographers into the lake. I mean, seriously, $10 Million USD? And he’s pissed off with the guy that helped made him that? He was caddying for Raymond Floyd before this gig with Tiger…he would be making probably US40,000 over the same period of years.

Steve was sacked by Greg Norman too in his prime. Greg went on to win 12 more PGA tour events including the Open championship over 8 years. It was believed Steve got ‘too close’ to Greg. Read: He was probably giving too many opinions to Greg and scolding him for fluffing the chip shot etc, like what the KGNS caddies do to us. I mean, who’d like playing with a clown like that?

I have a feeling that Steve Williams could have been grumbling too much with Tiger, as Tiger recuperated and got well. I mean, so he hasn’t won in 2 years. You’ve got USD10 Million for your troubles and you blast him over the media like he owes you something? Seriously. Steve is a great caddy. But that’s all there is. He ain’t the guy swinging the club. Tiger is.

And Tiger has given him there was, and if there’s a time for change, then take it and move on. I mean, it’s not as if Tiger didn’t pay him or whatever. WHO CARES if it’s an SMS or face to face etc? What sort of planet of emotional metrosexual idiots are we now living in? Why does Steve thinks he’s entitled to some privilege from Tiger? Is it because he got replaced by a caddy who resembles Snow White, without the puffy shoulder pads and laced skirts, and 7 strange old men looking at her sleeping?

In the perfect world, Tiger would have just replied: “Steve, I have neither the time nor the inclination to explain myself to a man who rises and sleeps under the blanket of the millions that I provide, and then questions the manner in which I provide it! I would rather you just said “Thank you,” and went on your way. Otherwise, I suggest you pick up a 7-iron, and stand a post. Either way, I don’t give a damn what you think you are entitled to!”

In conclusion: Tiger took the higher road. He didn’t blast Steve over the media. In fact, he even said he texted Steve after Adam Scott won, and congratulated him. Even if he DID NOT do it, the fact that he said it, it’s like pulling out 4 wisdom teeth at once for Tiger. With a rusted plier. But Tiger did it, because he was grateful for Steve’s service over the years. Unfortunately, Steve, the ingrate, is just interested in pulling down his golden goose. Tiger made the right choice. With a character like Steve Williams, who is so used to winning and only interested in winning: during a time of rehab, Tiger needs a change. Less expectations. Less loud mouthed opinions. He needs to find his zen again before killing everyone in the course like he used to do.

I hope it starts this week.