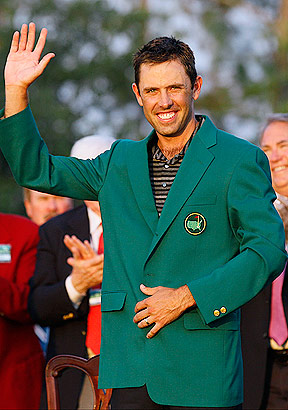 This Masters had it all.

1) We had a Lucy and Linus’s brother, Bo Van Pelt playing with two eagles yet cannot win.

Their creator, Charl Schulz instead took the honors.

2) We had Rory imploding with +7 in the back nine. So sad, yet, it’s a bit of schadenfreude isn’t it, hackers? BTW, Christina Kim seems to really feel for Rory in her tweets, so maybe we should all feel for him and stop making fun of his curly hair, because we all know most Gilagolf readers have a SERIOUS CRUSH on the big gal. Seriously. You guys voted in our previous Hot or Not poll. Christina Kim came first out of 268 voters, ahead of Michelle Wie and Natalie Gublis. Officially Malaysian Golfers have secret crushes on Big Women because we instinctively relate them with FOOD. Take that, stereotype beauties.

3) We had Tiger missing 3 putts within 3 feet like a 24 handicapper hacker. But Tiger finished 4th, and hilariously, here’s what Ian Poulter tweeted after his round:

“Shame I’m not watching the masters about ti fly home to Orlando, it sounds interesting.”

Or, to interpret: “I’m not watching because I know Tiger is going to piledriver his 7 down my throat and ask me to suck it for saying he is a crap golfer. Oh, I wish I didn’t tweet so much like a girl. And I wish I can play better golf instead of wearing tablecloths for my pants.”

4) We have, for the first time, 3 aussies in the top 4 of the leaderboard (yet, still cannot win). We have Jason Day putting like he’s Tiger on the back nine, yet cannot win. The Ghost of Greg “Sharkfin Soup” Norman rises to haunt the Aussies.

5) We had Adam Scott who decided last minute on the 17th and 18th he would look not so handsome in the green jacket and played like a misfit. We also had Luke Justin Timberlake Donald popping in a chip and going a fist pump like he won it all, when actually he is so far back it makes no difference. Compare him to Tiger’s “I rather go eat because -10 sucks.” Aiyo, relaks lah.

6) And we have a guy whose surname we can’t even remember win the green jacket. I guess Charl Sauerbraten deserves to win.

Once again, GPE’s pick of Tiger, Angel and KJ craps out again. On to the next major then….