Every once in a while, there comes a time where we actually go on a holiday without golf on the agenda. It’s difficult to imagine, yes, but there you go. To England, near the birthplace of golf and absolutely no golf played at all. I suppose there is no relevance at all to this blog, but since I don’t have any other blogs for my non golf buddies (actually curious family members) to go to, I’m just piggy backing this to explain to them that I actually DID NOT play any golf, even though I was presented with the opportunity to go ‘punting’, as the local Oxfordians would call it.

So what does it take for a reasonably cheap, and quick trip to England?

1. Get out of London

This seems like a curious decision, but you can’t experience England if you spend most of your time in London. It’s packed, it’s full of Asians, it looks like any other city except for the cramped underground trains and cold weather. Take a car and get out to the countryside. If you have limited time, go to the southwest of England like we did, or the southeast. North of England is a little too long a road to travel.

England loves manual cars, maybe because they don’t have traffic jams like we do. Actually they do, and it will get 1000x worse when the Olympics roll in next year. In fact, many Londoners are predicting the 2012 Olympics to be a utter and complete disaster due to London’s crappy metro and horrendously packed trains. Anyways, get a good solid car to head out into the country. We chose the solid looking Peugeot 3008 Diesel. It’s a GREAT drive this one.

Castles are to England what Wats are to Thailand. You simply can’t go England without at least seeing one castle, preferable one in ruins and offering some really good pictures. Castles are embedded in England’s history; from the Arthurian Legends to Robin Hood to Rapunzel.

You can delve into the history of England with related courses from various Online Colleges.

But for us, who suck at learning, we took the practical route and headed west of London, we took the road to Dorset and came across this place called Isle of Purbeck, and there, Corfe Castle. It’s pronounced “Corf”, not “Corf-fee” which we were happily pronouncing until a local guy corrected us. Anyway, it’s a pretty amazing place. They say this was where Enid Blyton based her Kirrin Castle from the Famous Five books, from. No, Enid Blyton is not a golfer. She’s a children’s writer.

England has some of the most amazing coastal lines you’re ever going to see. The southwestern part offers the Jurassic Coast, spanning hundreds of miles of wild English countryside. The South east offers the white walls of the Cliffs of Dover. You ain’t seen England till you see the coasts.

As we were in the southwest and pressed on time, we headed over to Lulworth Cove, which is one the most picturesque place in England.

We caught it on a nice day, especially in the traditionally gloomy mid-November. It’s a horse-shoe shaped cove offering some spectacular viewpoints into the English Channel. From there, it’s about a mile hike to another of England’s coastal offering, Durdle Door.

of course, being Malaysians, we opted for the short drive over to Durdle Door from Lulworth Cove. We caught it during sunset which gave some great views.

I took a hike up to the highest and farthest point of Durdle Door. From outer space, this would be where I was. 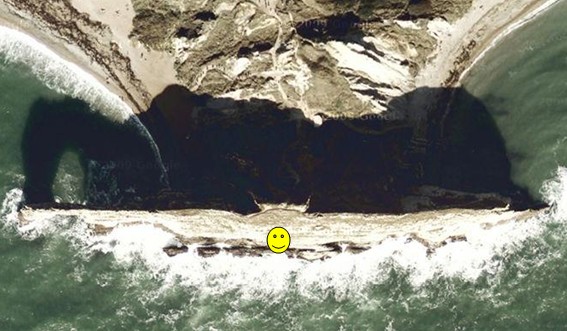 You basically look out and you see this:

To the left and right, you see this:

Actually, it’s not really advisable to climb there, as recently there was a death where some intrepid tourist, no doubt looking for the best camera shot of his life, plunged hundreds of feet into the waters below. It’s quite dangerous once the winds blow up there, so I had to be a little careful I don’t join him into the surf below.