But same can’t be said about the GC’s job.

Like all good members, I decided to miss out Tiger’s last day at CIMB (which turned out to be a heck of a day for Nick Watney and his hot missus), to attend the critical EGM to vote on KRPM’s future. There were a couple of resolutions in there, which I won’t bore my readers here. Basically the first one is saying to ammend something in the constitutional rule. Rule 36.3 or something. Then the next one was to get some professional guys to value our club. The other one was to see whether we want to sell it, either 36 holes or 9 holes, for some greedy developer.

Now I obviously am not sure if I understood it correctly, someone probably will correct me, but that’s what I think I was supposed to vote for. Which I didn’t. Because like all EGMs it started VERY late, and the room was too small to accomodate everyone, and the guy next to me (bless him for his good intentions) smelled suspiciously like he had too much to drink.

The turnout? Here’s the view when I turned into the road leading to KRPM.

Upon reaching to register my name:

Yup, that’s the freaking line. Someone told me, look you need long pants and shoes! I am like, are you serious? Cuz, I’m dressed as a typical china-man, which constitutes 80% of this club anyways right?

And so I had to head to the wonderful golf shop that had so much business and buy a  nice RM60 golf pants and a 300RM shoes. Yes. RM300. It’s a nice shoe though. It’s called TRUE Linkswear and I immediately LIKED it. 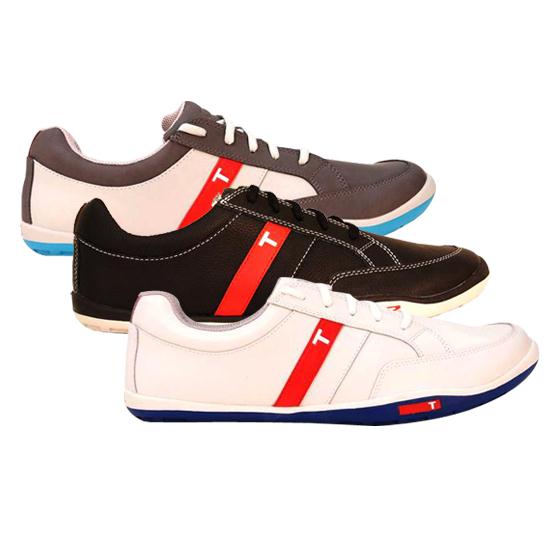 I bought the one at the top. Finally, they make golf shoes that you can go out with. Anyway, I thought I could splurge a little, seeing that I missed out Tiger and his 4th placing at CIMB. I was gonna spend the money anyways!

Anyhoos, back to the EGM. After the chaotic registration and the delay from 2:30 pm to 4:15, we finally convened in the main hall, which I think can probably sit 500 – 600 people but it turned out to have like, I don’t know 1500? 2000? I don’t know. A lot of human beings. And some of them had shorts. And japanese slippers. Dang the guy who tricked me into buying the funky looking golf shoes!

I’ll be honest with you. After being there from 2:30 and hanging out like a chimp with nothing to do for an hour plus, I wasn’t too happy at all. And a lot of people were pretty pissed. I stayed long enough to listen and do my customary hollering and heckling but by 5:30 pm, we were still stuck with people talking about the dang Rule 36.3, which some considered “sacred” and cannot be changed. The only thing sacred was my stomach growling with hunger.

But looking at the people gathered there and the amount of heckling towards Arthur, our president everytime he opened his mouth, I was certain there won’t be any sale anytime in the future. Here’s the breakdown of people attending:

3. People who don’t want to sell even if you put a shotgun to the head of their first born – 1%

I am part of that 98% group, who feels that, look, if you were to give me a really really ridiculously good offer, like maybe 150K upwards, heck, it’s a no-brainer. Everyone has a price. But not at this basement price they were talking about. It’s a no-brainer as well. Our club is worth a whole lot more than that.

However, the 3rd group was pretty convincing in their rabid devotion to the club. They will never sell, not for a billion dollars. Either way, I’m pretty happy it turned out ok, and that KRPM (for now) is safe. Who knows, maybe 2 years down the road, the offer will be something we can’t refuse?