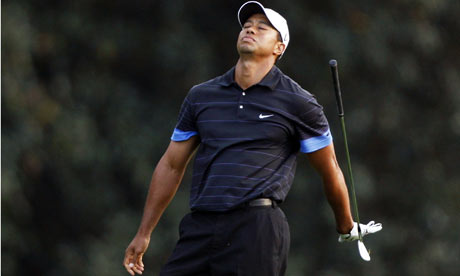 You know that this is coming.

Of all the biggest fan of Tiger’s, Gilagolf is the biggest. I mean if it wasn’t for this guy, I wouldn’t even have picked up the club 12 years ago and started my lifelong spiral into this mega time-wasting, money-hogging, life-destroying game called golf. It’s because of this black guy in the red shirt on Sunday, killing everyone who dared to challenge him. He was Michael Jordan of golf and after years on top, the game unfortunately still needs him badly. Badly.

You would think by now, someone would have stepped up to the plate. But has anyone replaced Michael Jordan? Nope. Likewise, I hate to say it and sound like the biased fanboy I obviously am – noone has replaced Tiger. Sure, you got a slew of jokers exchanging number 1 ranking, the latest being this Irish boywonder with a beautiful swing – but he has a personality of a cardboard.

Tiger? Boy, he sucked at the Phoenix open. He hit like seriously crap shots. I mean these are shots, I am hitting. At the risk of being ridiculed, I know what he’s going through. There was once that the thought of chipping completely sent me into an epilepsy. I was retarded at chipping. To a point I would putt from 30 meters in. To a point where if I had a go for a Par 5 in two, I would rather lay up to a 100 meters for a full sand wedge as opposed to anything resembling a pitch or a chip. I don’t know. It was just a time when my neurons refused to work, and my chip would be a duff, shank, skull, or anything.

I have somewhat recovered (this was late last year), but I am still struggling with bad chips. It’s not so much of technique but a mental retardation. I just know what I am supposed to do but cannot execute. Then I will second guess myself and turn into a baboon trying to hump an iguana. While getting tasered at the same time. I think Tiger is pretty close to a tasered baboon humping an iguana, so I gotta say this, he’s really got to get his act together for next week.