Ok, I was randomly watching this golf program on Star Sports today called “Golf Focus”. Basically, it’s like Football Focus where three dudes sit in the studio and talk about the sport. Football focus is enough to put me to sleep…but occasionally, Shebby Singh tends to make some out of the world nonsensical, Paula Abdul sort of remark that cracks me up, before I eventually snooze off again, until my wife shovels me up to bed at 3 am.

Now, Golf Focus? Heck, the game is already as boring as it is (although there’s now an attempt to shorten it, like Cricket, calling it Powerplay Golf, which is supposed to condense golf tournaments from 4 days to 3 hours. Don’t laugh, it’s supported by Colin Montgomerie, mainly because he keeps choking on the 4th day, so he hates long golf games and is lobbying to make Augusta a 3 hour fiesta. With a Mardi Gras float.)

And supported by a guy called Lip Ooi. Yep, that’s his name, and no, it’s not a Hannah Barbara Cartoon character who teams up with Wile E Coyote to hunt down Road Runner. Here’s Lip:

And the ‘golf pro’ is this guy called Richard Harris, and I can’t find a picture of him because his name is so common, it’s the name of a dead actor, a black singer, a criminal, a knight from England, a Puritan in the revolution, a wizard and the brand of a Chinese fertilizer used in the Yong Chow region. I recall the golf focus Richard Harris is bald with a moustache, so I’ll just take the closest resemblance:

Ok, there is a point to this post. For close to an hour, I was between watching this Golf Focus show, picking my nose, clipping my nails, eating a pear and wondering how on blazes did Tiger miss a 2 foot putt for eagle on the 15th at the Augusta. Then, towards the end, the show shifts to the weather forecast (?!?) for some strange reason, mainly because they ran out of things to yammer about, and Lip Ooi was snoring halfway through. The weather forecast was then done by this girl called Kelly Latimer: 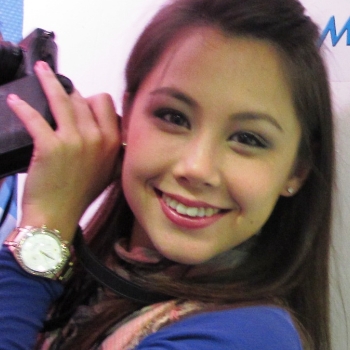 Golf Focus, are YOU SERIOUS? No, are you guys at the booth smoking weed, that has blinded all of you to the obvious PROBLEM with Golf Focus, which so far has only accumulated a total of two viewers in the world, that of the 0.1% of my attention, and the attention of my westie Terrier, and that only because he can’t change the channel on my new TV?? You have this girl called Kelly Latimer in your show for a total of 43 seconds, talking about the weather, and for almost an hour, you have those 3 clowns anchoring the show?

From that, my terrier and I conclude that the entire Golf Focus team are on weed, or made out of entirely women staff. Who hates pretty girls. Because they are obviously not pretty.

Moustachioed Bald Man who has many boring opinions of other golfers: Seriously. Again. This is almost sad.

Again, our general conclusion is that Golf Focus is either run by weed smoking producers or the HOUSEWIVES-AGAINST-PRETTY-GIRLS-IN-FRONT-OF-CAMERA association.